A massive, adult collared elephant bull named Puran has amazed our researchers by blazing a trail across a vast desert landscape in remote northern Kenya, showing once again how elephants are expanding their range northwards into areas from which they haven’t been seen in decades.

For a whole year prior, Puran had barely left his favourite stomping ground of South Horr valley, where he’d made unremarkable journeys up and down the slopes of the valley, with only a brief excursion to the nearby Ndoto mountains.

All that changed in April, when we observed on STE’s WildTracks tracking app that Puran had suddenly left South Horr and was heading north. He was then recorded streaking across the expansive Chalbi desert before reaching the southern foothills of an extinct volcano, Mount Kulal. What drove Puran north? We’ll never know exactly. Perhaps he was looking for water, food or, tired of his lonely bachelor ways, wanting to socialise.

Our Save the Elephants’ Samburu team was able launch an aerial monitoring mission to the area, and to catch a glimpse of Puran from above. In great excitement, we discovered that Puran was not alone, but accompanied by eight other adult bulls. 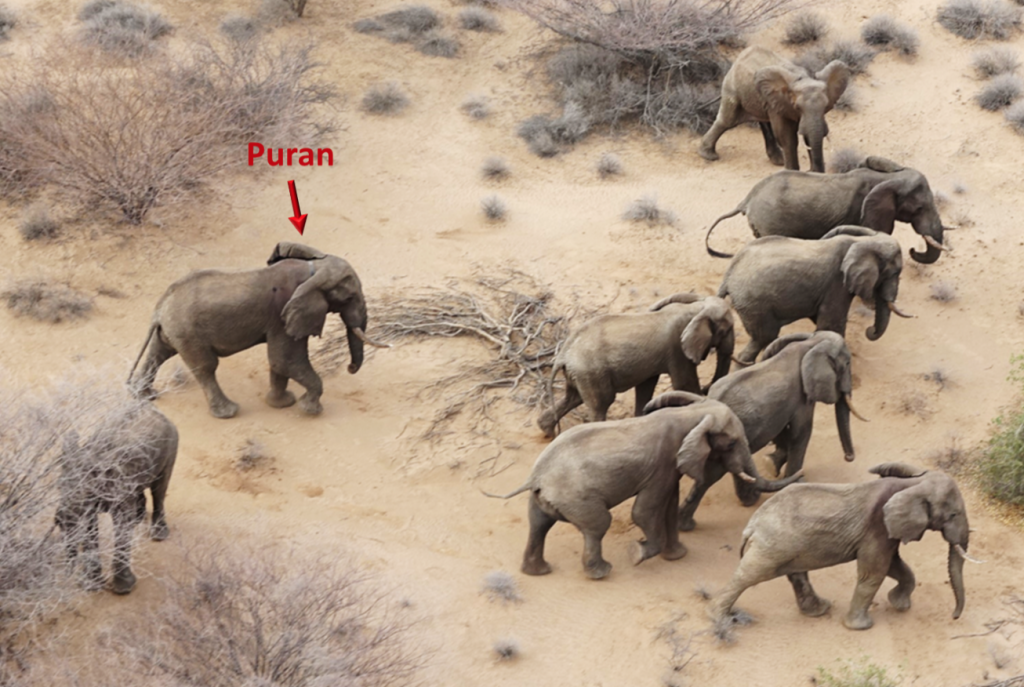 Puran is the second bull in South Horr that we’ve collared. The first was Nyiro, in 2016. By tracking these bulls’ movements we are gaining a better understand of this new northward range expansion, and starting to get a picture of the elephant routes leading across the northern deserts to Mount Kulal.

In 2016, Nyiro’s long-distant movements took him into areas where elephants had virtually been eliminated during the poaching crisis of the 1970s-1980s. Our aerial surveys also revealed elephant tracks further north, towards the Chalbi desert and the montane forests of Mount Kulal where elephants had not been seen for at least forty years, possibly up to a century. Confirming these observations, local Mount Kulal residents have recently reported the presence of elephants on the mountainous slopes.

Although Puran did not venture on the slopes of Mount Kulal, his movements could provide us with unprecedented insights into how elephants are re-colonizing areas from which they had been eradicated. This will also help us to identify and develop solutions for new conservation challenges as elephants come more and more into contact with local communities.

Following his daring adventure, Puran made it back safely to his beloved South Horr valley, and resumed his mountaineer habits up and down the slopes. Our team at STE will be keeping a very close eye on him just in case he suddenly feels the urge to head north again.