Samburu, Kenya. Rare elephant twins have been born in Samburu National Reserve, Northern Kenya. The discovery was made by guides from the luxury eco-camp, Elephant Watch Camp (EWC) on Sunday morning (January 16).

The guides at EWC are trained by Save the Elephants (STE) to recognize individual elephants and families in the park. They alerted researchers from Save the Elephants who confirmed that the calves are a male and female, and were roughly one day old.

Bora with her twins in Samburu National Reserve, Northern Kenya. Photos by Jane Wynyard/ Save the Elephants

The mother of the twins is a female named Bora from Winds II family. Save the Elephants has been studying and monitoring elephant behaviour and movement in Samburu for 28 years so knows the family well. The twins are Bora's second born. She also has an older calf which was born in 2017 and was seen in the vicinity of Bora and the twins on Sunday.

Save the Elephants’ founder, Iain Douglas-Hamilton says. “Twins are rarely encountered in elephant populations - and form around only 1% of births. Quite often the mothers don't have enough milk to support two calves. In fact the birth of twins has only ever been recorded once before in Samburu in 2006. Sadly both calves died shortly after birth in Shaba National Reserve. The next few days will be touch and go for the new twins but we all have our fingers crossed for their survival.”

The African elephant has the largest gestation period of any living mammal – at approximately 22 months and gives birth roughly every four years. Save the Elephants researchers will monitor the health and progress of these calves as part of their daily monitoring activity.

Watch the twins' first days in Samburu while hanging out with their mother, Bora, and a big bull named Daud. Footage by David Leaderboard and Meha Kumar. 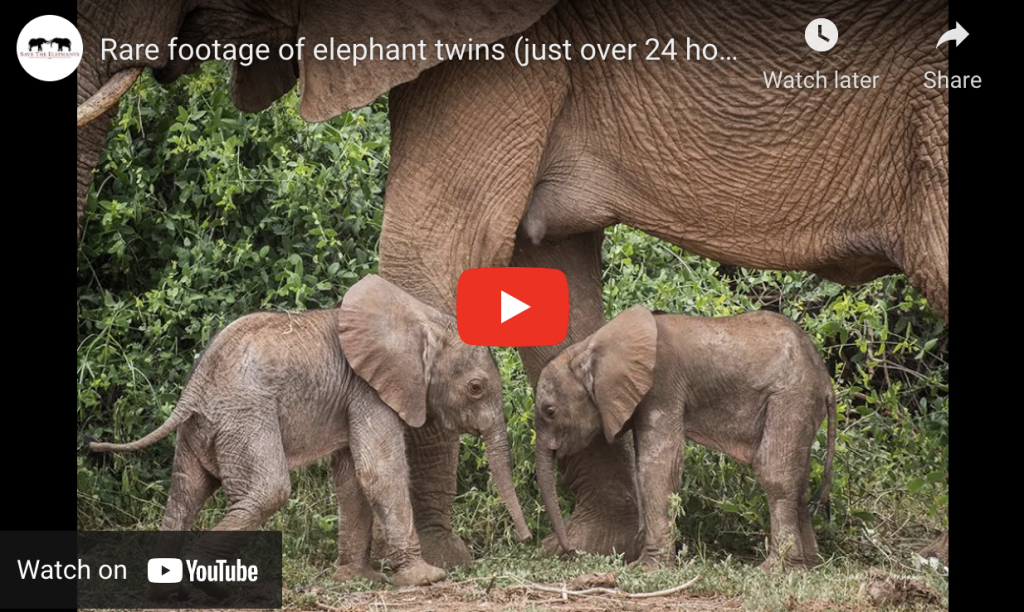