Human-elephant conflict is on the rise across Africa and is a major threat to wildlife conservation. Crops provide a highly nutritious food source, but elephants pursuing that source results in the destruction of farmer livelihoods, erodes human tolerance toward wildlife and manifests in retaliatory violence on crop-raiding elephants.

Crop conflict was assumed to be mostly carried out by a select few elephants, but managers have lacked the means to assess this at a detailed level. New research, however, offers a first look at long-term trends in crop-raiding behavior. Researchers found that habitual crop-raiding elephants are only a part of the problem.

The study was led by an international team of researchers from Colorado State University, Mara Elephant Project, Grumeti Fund, Tanzania Wildlife Research Institute, Kenya Wildlife Service and Save the Elephants. It was published Nov. 2 in the Journal of Animal Ecology.

The team used the time spent in crops each year to classify the raiding elephants’ behavior as:

Sporadic and seasonal elephants made up two-thirds of the population and accounted for 67% of agricultural use, while habitual individuals made up just 9% of the population and accounted for 32% of crop-raiding. The choice of tactics was not constant over time and elephants frequently changed tactics between years, which showed how the animals must balance the mortality risks and nutritional benefits of crop use at both daily and yearly scales. Only five of nine elephants remained habitual raiders for consecutive years.

“Elephants are incredibly unique animals and populations and individuals within those populations vary markedly in the extent to which agriculture is utilized,” said Kristen Snyder, a conservation scientist at CSU and the Grumeti Fund, and a co-author of the new study. “But the patterns of how agriculture is accessed — nocturnally, and while moving quickly — is remarkably consistent across individuals and populations.”

Traditionally, researchers and managers believed only a small contingent of elephants was responsible for the majority of crop raiding, and as a result, management strategies have been designed to thwart them, explained Nathan Hahn, a doctoral student in ecology at CSU and lead author of the study.

Hahn said that the team wanted to assess how that expectation aligns with actual elephant behavior.

“It turns out crop-raiding is a lot more prevalent in the study populations than we knew previously,” he said. “In addition, patterns of conflict are complex because we saw that individuals frequently changed their agricultural use between years.”

The research team analyzed nine years of GPS tracking data from 66 collared elephants —32 male and 34 female — in collaboration with Kenya Wildlife Service and the Tanzania Wildlife Research Institute in the Serengeti-Mara Ecosystem. This ecosystem is a vast network of wildlife reserves, parks and community conservancies that straddles the Kenya-Tanzania border.

The GPS data was used to determine the extent to which each individual elephant used agriculture and assessed the animals’ perception of risk based on the raiding tactics they employed in comparison to their daily movement patterns.

A ‘silver bullet’ approach is elusive for a complex species

Jake Wall, director of research and conservation for Mara Elephant Project and affiliate faculty at CSU, said that by using GPS tracking coupled with remote-sensing agricultural spatial information, scientists now have a method for characterizing crop-raiding behavior within a given elephant population.

“This in turn should help improve elephant crop-raiding mitigation strategies by wildlife managers,” he said.

Snyder said that the study’s findings can identify crop-raiding mitigation strategies that could have an impact and, just as importantly, eliminate those that do not suit the local context.

“In the western Serengeti, the high prevalence of agricultural use among the study population indicates that strategies targeting individual problem animals are unlikely to significantly reduce crop damage,” she explained.

Individual or small-scale approaches will make little difference if 80% of the local elephant population regularly utilize agriculture as a food source.

“Instead, solutions that prevent elephant access to farms across broad scales are required,” said Snyder.

CSU Professor George Wittemyer said that elephants employ complex, adaptive movement that balances their desire to access resources while avoiding threats. He is a senior author of this study and also serves as chairman of the scientific board for Save the Elephants.

“This research shows how that perceived balance differs between individuals, but also shifts over time for a given individual,” Wittemyer said. “This variation underpins the difficulty in solution oriented human-elephant coexistence measures. As we often find, a silver bullet is elusive for a species as complex and clever as elephants. We must be as adaptive as they are when trying to solve these problems.”

This work was supported by the National Science Foundation. Permissions for the Tanzania elephant collaring and research were granted by Tanzania Wildlife Research Institute, Tanzania Commission for Science and Technology, Tanzania Wildlife Management Authority and Tanzania National Parks, and in Kenya by the Kenya Wildlife Service. 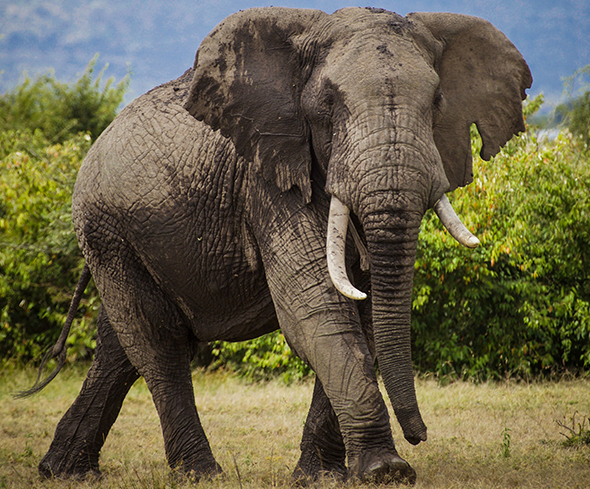